The Student? Assembly? is a joint collaborative project initiated and organised by members of the Student Council and the Student Circle with Saja Amro, Ayman Hassan, naira nigrelli, and ghenwa noiré. It has been a long-time dream of the Student Council to organise a student assembly, and the pandemic made it even clearer the dire need for us to gather together. At the end of 2021, during meetings with BAC student representatives (naira nigrelli and Karolina Wilting), we decided to collaborate on a student assembly. Originally slated for December 2021, the assembly ended up being postponed to the end of March 2022 due to the pandemic, although it was possible to organise something online, it felt important that the first assembly happened in person, around tables, between food and drink.

The backbone to this first assembly was questions: what is on the mind of the STUDENT BODY? What do we wish for? We launched a cryptpad to gather questions from the students, which proved to be a fruitful platform. We then organised the questions and issues raised into general themes, which formed the basis of the discussion tables at the assembly. In small groups, armed with pen and paper, we talked, thought and shared together. These discussions were facilitated by Juliet Davis-Dufayard, Lina Bravo Mora, Jale Sezgin, Emirhakin, and Lila Bullen-Smith. For some questions there were answers, for others only more questions (as you can see from the paper). There was a lot of rage, frustration, animation, motivation… a sense, for the first time in a long while, of being able to face things together.

Our goal of this first assembly was not to solve anything, but to create more moments of open participation and togetherness; to collaboratively think and brainstorm on urgencies in the school, and of possible paths towards collective action. 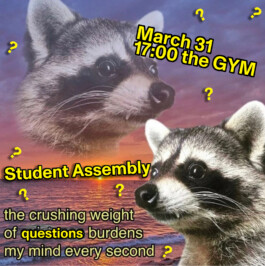 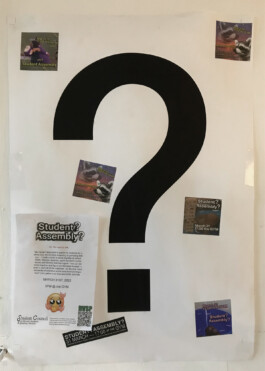 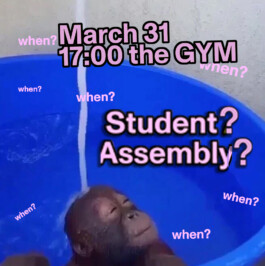 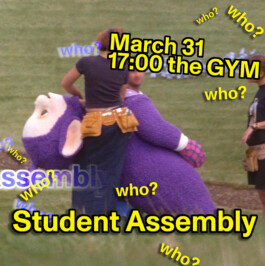 The design strategy took shape as a massive question mark, printed on huge posters that we stuck up around the school. Over the days leading up to the assembly, we stickered the posters and handed out flyers. 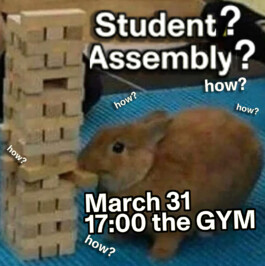 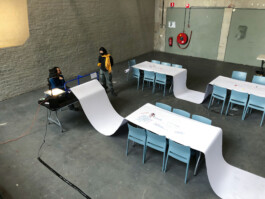 The choreography of the assembly, inspired by open-source conferencing and world cafe facilitation methods, made use of long rolls of paper draped over tables, on which the themes and questions were documented. The idea of these rolls of paper was to collect the ‘traces’ on the event, from people’s thoughts and ideas, to the footsteps, spilt beer, and spatters of the delicious dinner provided by Anna Garcia Gomez  and Julina Vanille Bezold. The rolls also feature the harvesting of Ayman Hassan, who recorded the event through drawing. This long roll is in the process of being turned into a book by Saja Amro, which will be presented at the entrance of the school for anyone to look through (and with blank pages at the end for people to continue contributing to). 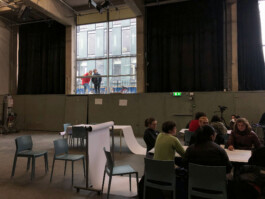 Through the cryptpad, some clear themes emerged that formed the basis of the discussions group. These themes, pictured below, were written on the paper rolls with the relevant questions surrounding them. We also left space for other questions and themes that came up on the spot. 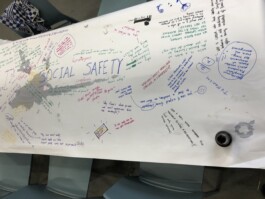 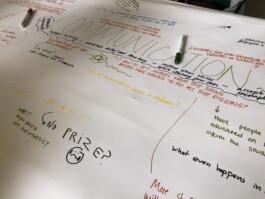 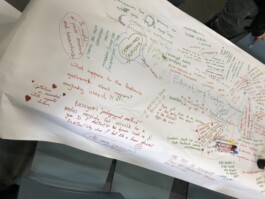 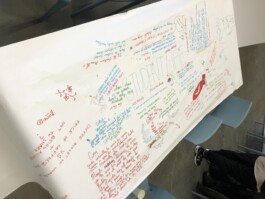 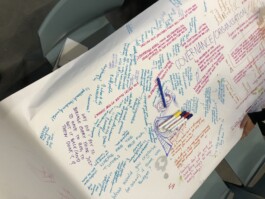 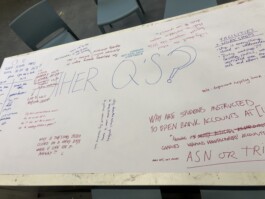 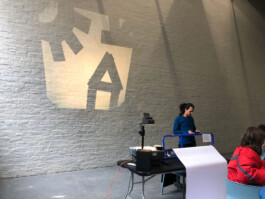 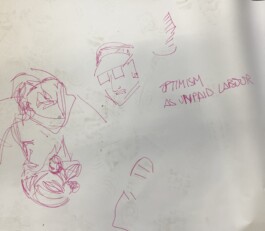 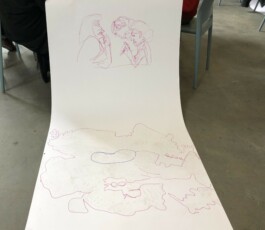 close up of harvest by ayman hassan

All the notes from the discussions of the assembly have been transcribed into a raw transcription, this website, and a communication campaign which we will share with the whole school in the fall. From the assembly we hoped to see what the urgencies are that we can imagine collectively addressing, whether by forming a working group, organising another, more specific assembly, pushing for specific changes with the school etc. It is important to us to be clear about what we can promise in the assembly, we can’t solve the problems, but that by coming together we can see which ones are the most pressing, and figure our ways together that we might tackle them, or put pressure on those who can.

If you have any questions or comments you can contact us here.

We haven’t been able to gather as students for a while now,

we’ve been dreaming of gathering with you,

it feels crucial to come together to

on the issues and themes that feel urgent.